I need Spacemarines for my fangame (I would like to be able to show a full Chapter on screen (which is one reason I made the SMs all flat and super low poly) , so this is a little "life of a space marine" project that will eventually get merged into "Victory Exterminatus Extremis"...

WASD to move around the ship and manually explore, like a Rogue-like.

Up and Down arrow to explore upwards and below.. (its clunky, working on better controls)

Day 12 reworking the interface a bit...

Day 11 (non sequential, i'm just gonna call it day 10, when it's really been a week later because I was experimenting with a battlesystem.. and prolly this week as well.. Set 24. . redid alot of the art.. looks, and runs much better.. changed the Cruiser model to a Detroyer..    working on exploration.. like the Destroyer is a giant 3D dungeon.. (look, I dont need exploration for this aspect of the game "simulating the everyday stuff of a Spacemarine", but I will need it for "Spacehulks".. so.. that's what it's really for (doing Spacehulks and planetary ground combat in Victory Exterminatus Extremis) 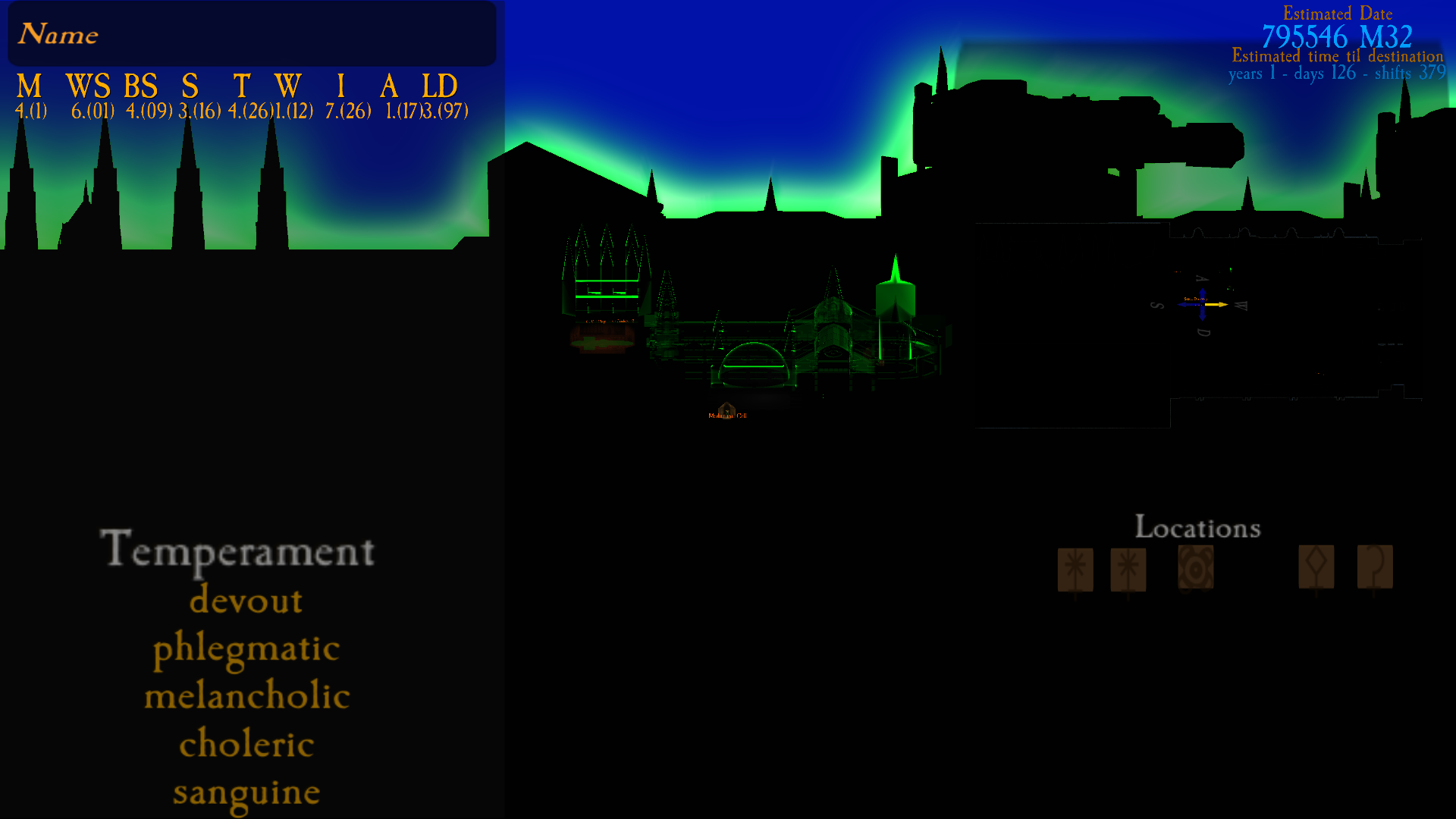 Day 10.. basic WASD exploration controls... kinda like Angband or Moria... starting some work on "random dungeons" and a battle scene..

Added some basic ability to explore.. it's not perfect yet.. but its there.. Arrow keys.. and "insert", page up, all those will rotate the camera

Day 9 broke the whole game yesterday right afetr doing all the canvas Attribute stuff. but that was a good thing, becasue it was better after making it the 2nd time around... working on attributes.. the numbers change fast, just ignore them.. I'll ask around for someone to adjust those numbers when it's further along..  concentraiting on "Temperment".. so removed the other buttons while I rethink interface.

Day 7 thinking about "psychic stuff"  I asked around a bit, and it seems there is about a 1-20/1000 chance of the Player being a psyker.. very low odds, which would make it cool for the Player.. so starting to add just some basic "psyker" stuff.. hit P to bring up the "psyker panel and view"... work in progress. 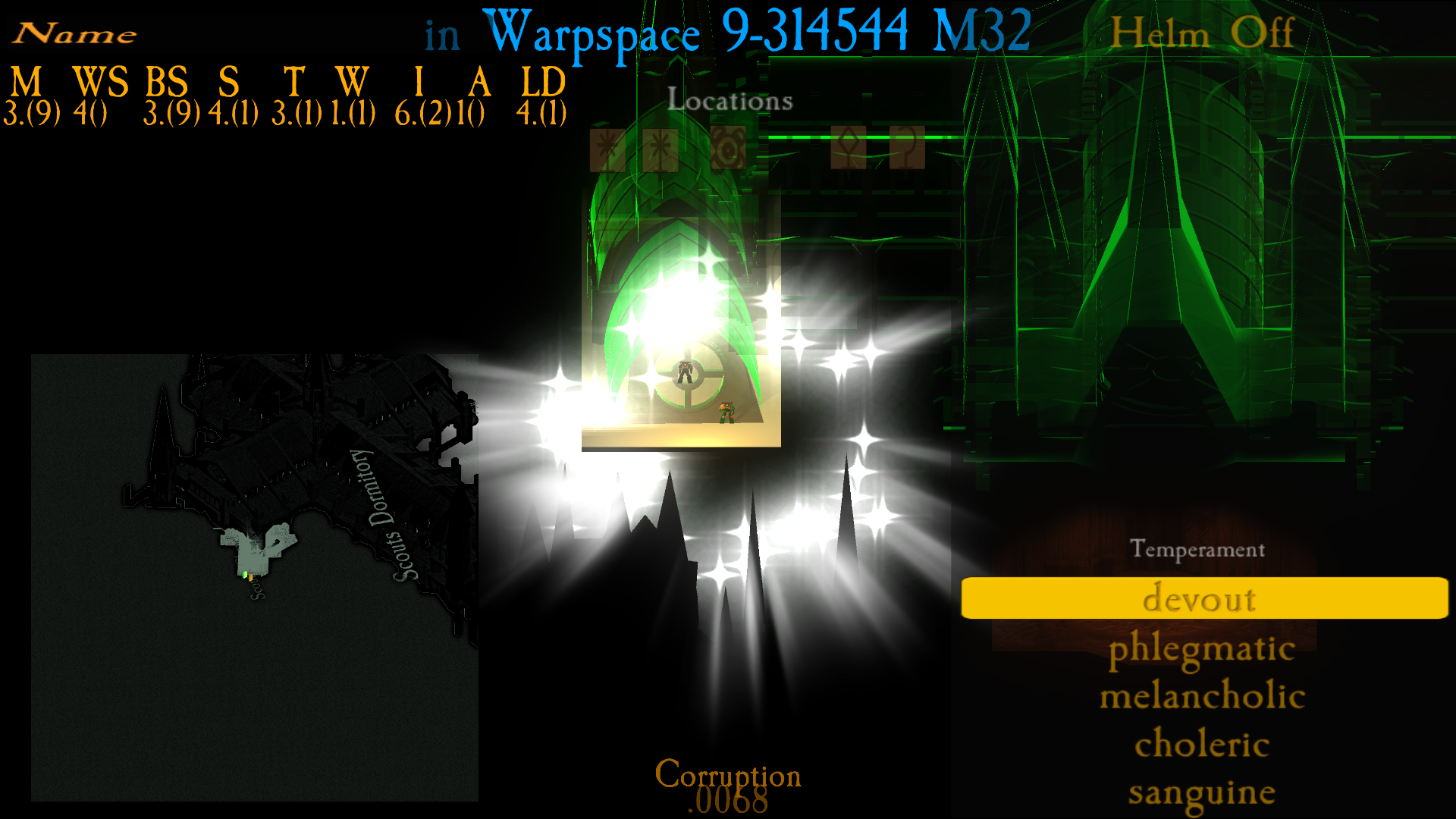 Day 6.. just concentraiting on the "Chaos Taint", my first "attribute" in the game, but I'm working out the system, then I can add in all the other attributes.. but going to the Chapel, or playing around with the "Temperment" buttons will affect that Chaos Corroption value, displayed at the bottom centre of the screen

Day 5 starting to work on "daily routine" for the SMs and a "Chaos Taint" value.. so devotion and spending lots of time in the Chapel will help that value go down.. but it will never be 0, and even though it starts very very small, it can grow fast under certain circumstances.. (I'm still defining what that "curroption" value should mean.. and I need to make some dialogue boxes, and a "battle scenario" and code the attributes and stuff.. and I'm trying real hard not to spend on graphics)

made a button so you can take off your helmet if you like.. playing around with the idea of making the art all 3D

fixed alot of things.. starting to give the SMs some personality...  still a long ways to go. "camera zoom" is not working on main view in Webgl for some reason, so I'm gonna upload a pc version, where the zoom does work with Mousewheel, but mainly I'd like this to be a web based game.

and made a start screen.. good enough for today.

Day 3 working on buttons.. so Player can move between areas.. right now just set to the Marine's Cell and a Planetary hellscape... Gonna make a few areas on the Ship the Player can visit, and make a simple "battle scenario" 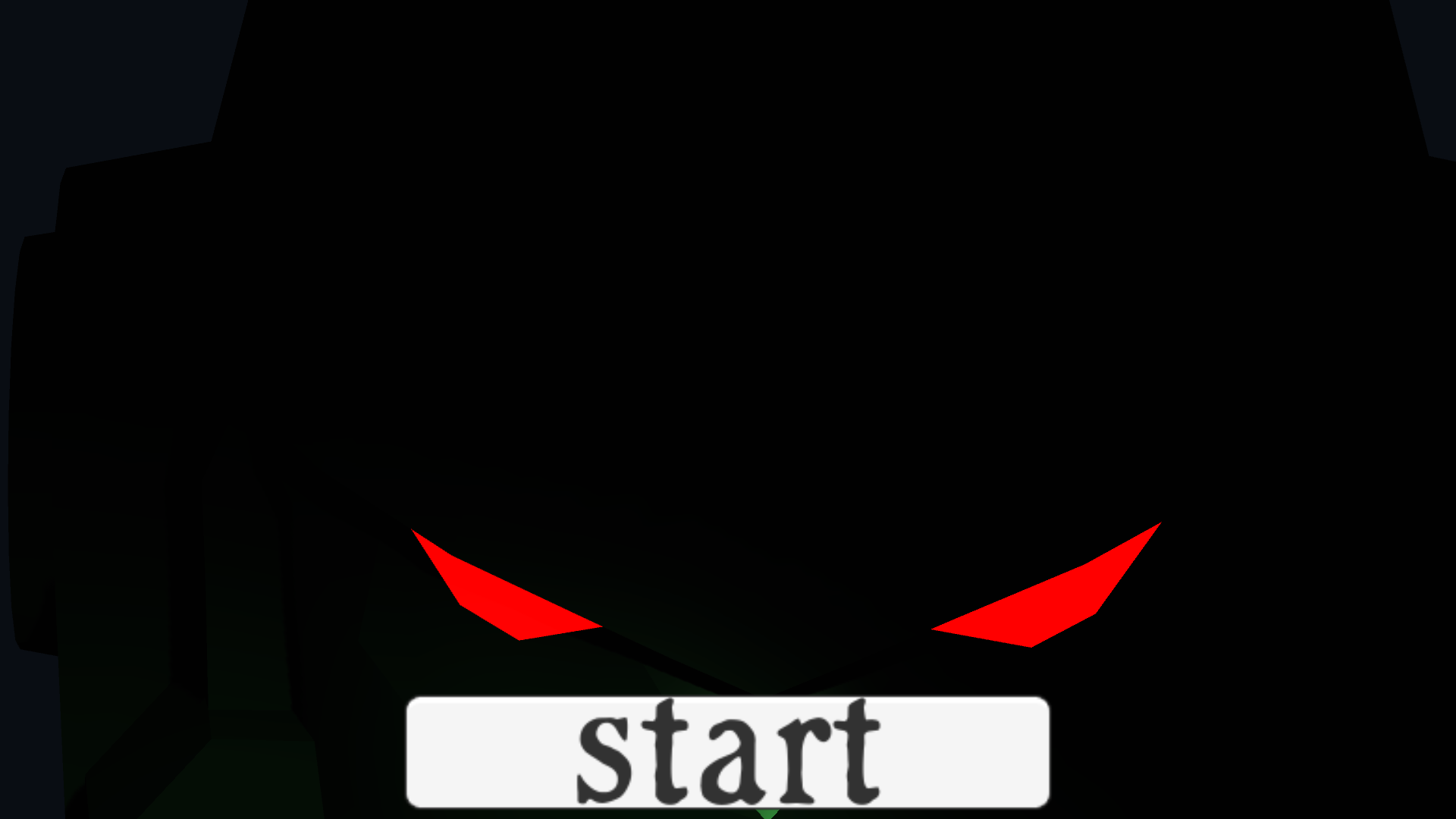 What shader are you using to get that kind of effect on the models?

its actually just a flat shaded flat polygon, with a "blur" effect on the camera layer...

(I know.. the marines look crappy... I could go for a nice high poly look, but then frankly the high poly model would be at least 10,000 times more complex and I wouldnt be able to do like a whole Chapter on screen at once, with effects and enemies.. which is like something Ive wanted to do since 1994.. 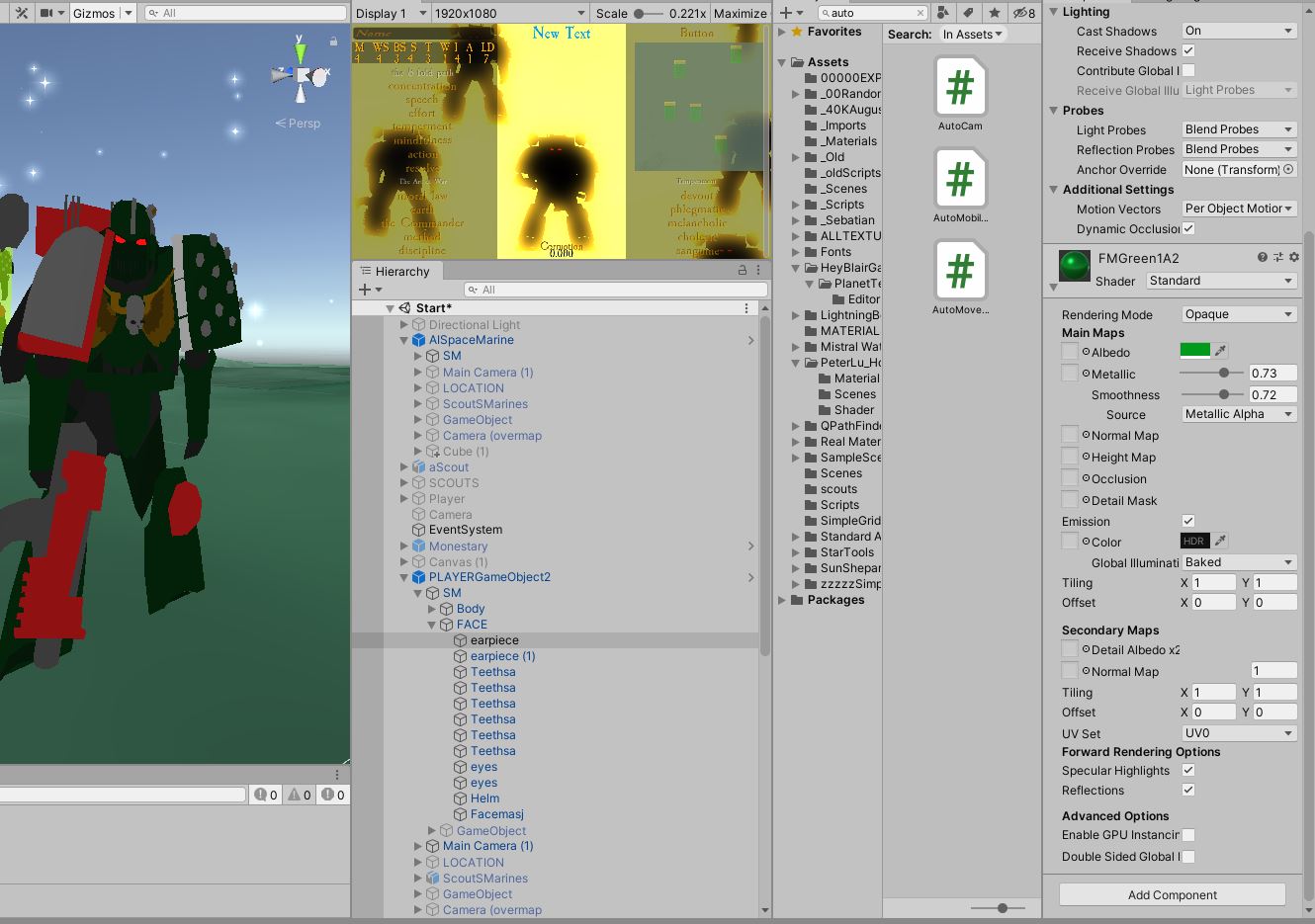 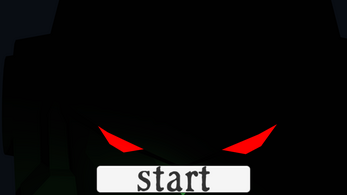 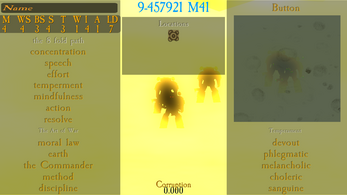 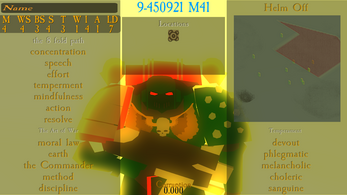 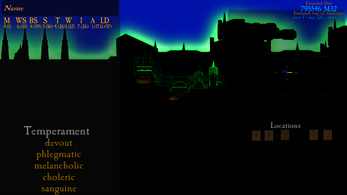 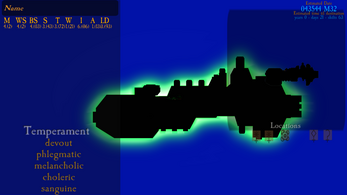 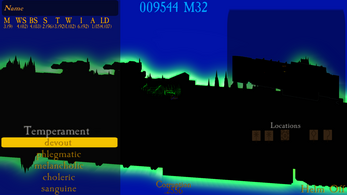 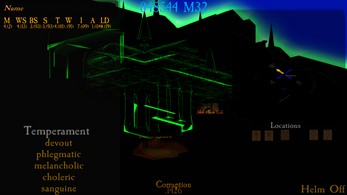 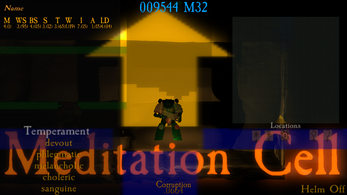