Download link all the way at the bottom of text

Navigate an Imperial Voidship in the year 30027 from Holy Terra to a random Sector in the Galaxy to pick up the Imperial Tithe and return with it to Terra.  (I'm trying to narrow down the scope of my game and add some gameplay... ultimatly though I want to make a starship combat sim)

Unfinished... so far the Player can start game, pick 1 ship, and fly around Luna and the Solar System and Warpspace some.

Oct 11.. Merging some of the stuff from "life of a space marine" into main game.

Aug 26. Working on Ork Empires.. trying to emulate the look and feel of orks in the galaxy in the new ork codex. so.. big green squares.. (which will trigger when Player enters colldier box).. here we see a smattering of ork empires within the Galaxy and surrounding the galaxy lots of warpstorms.. 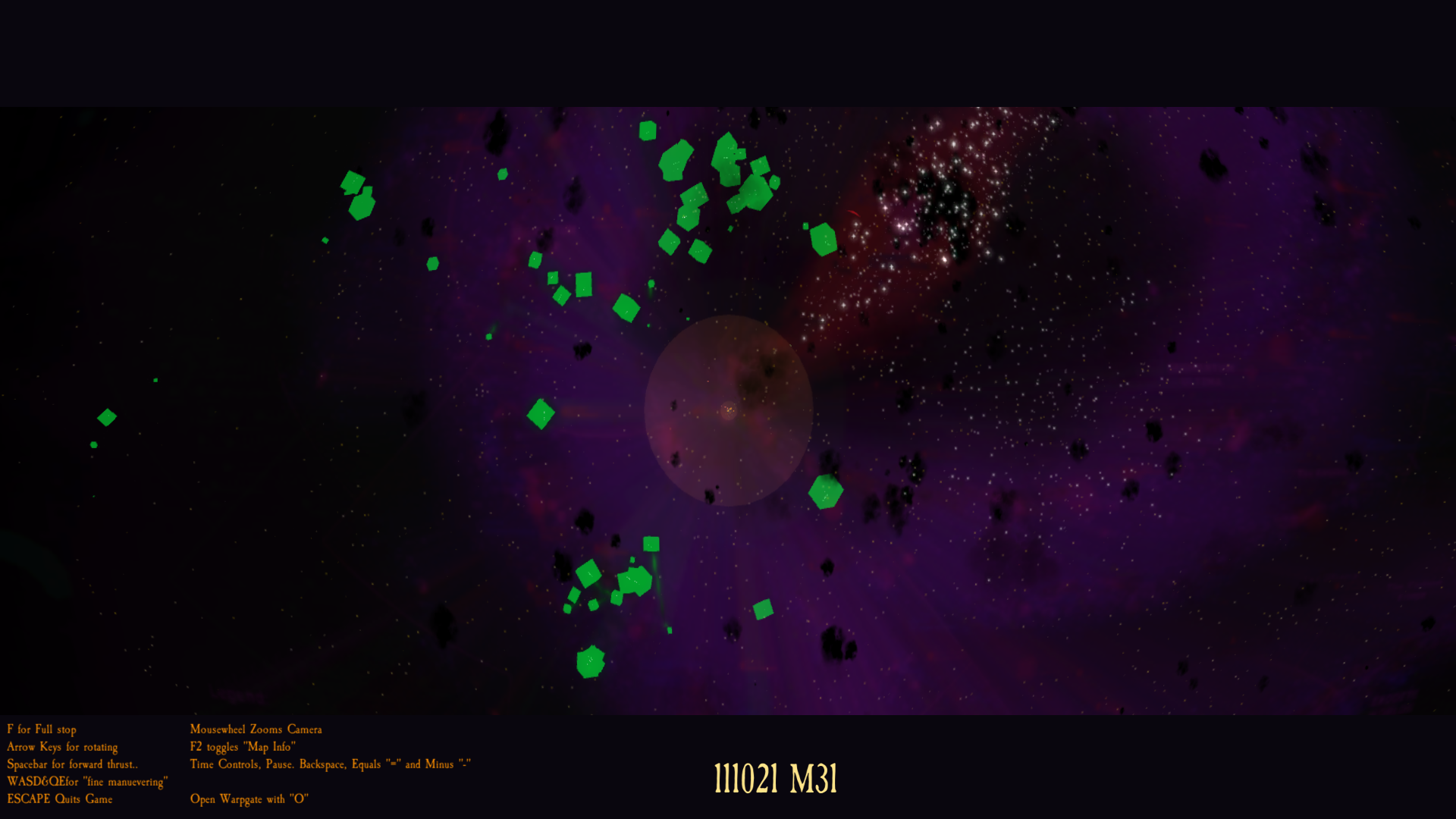 Is this gonna be worked on anymore?

ivwill never give up on my dream game. ..

You know, what i want. Is, like, the Player is the 2nd or 11th Primarch, and he manages the legion, and experiences as much 40k history as they can before they die

Aug 23.. working on WAAAGH!s uploading some new versions.. no idea how the WAAGhs will effect performance right now as they are kinda chaotic, random. 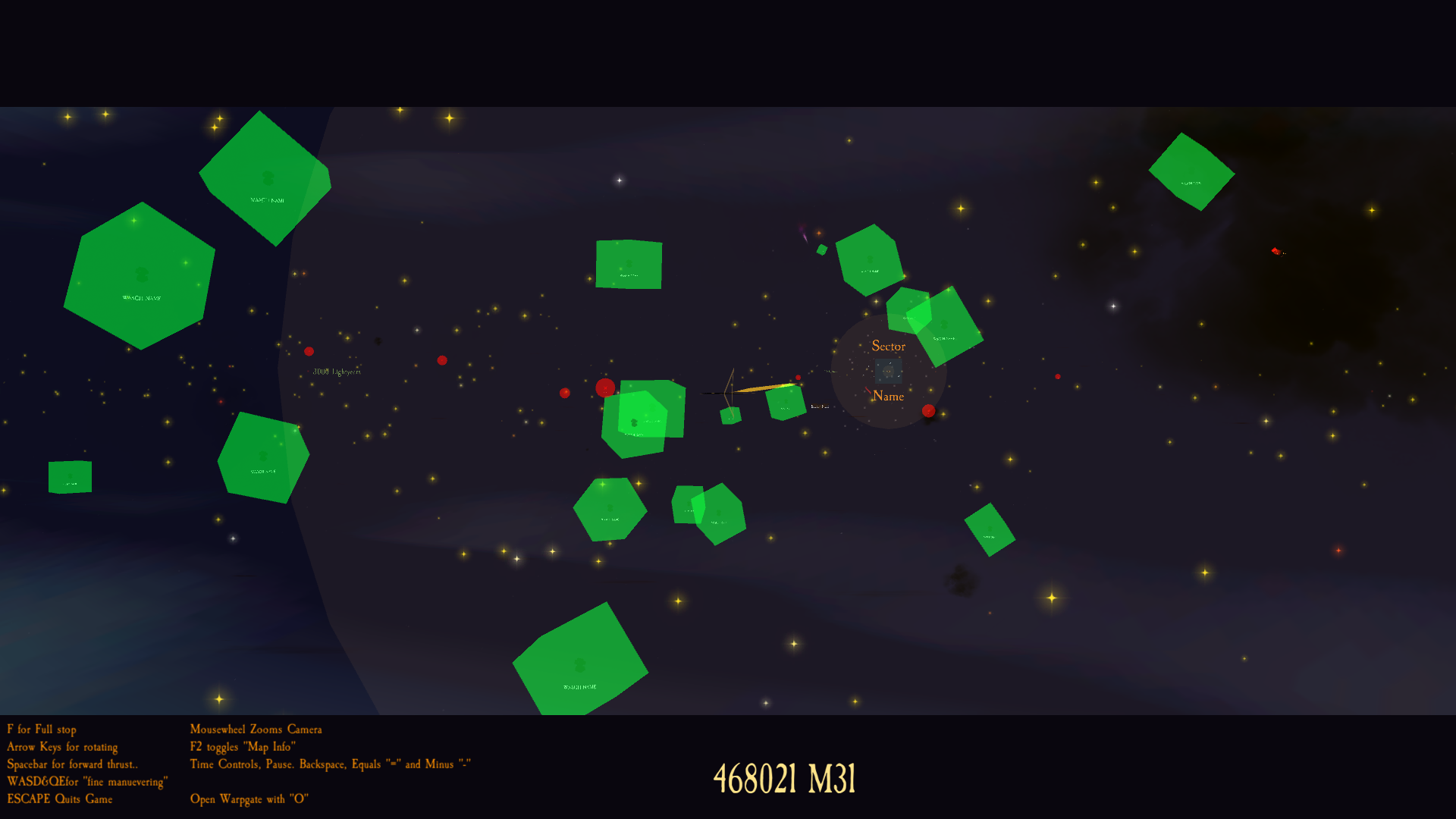 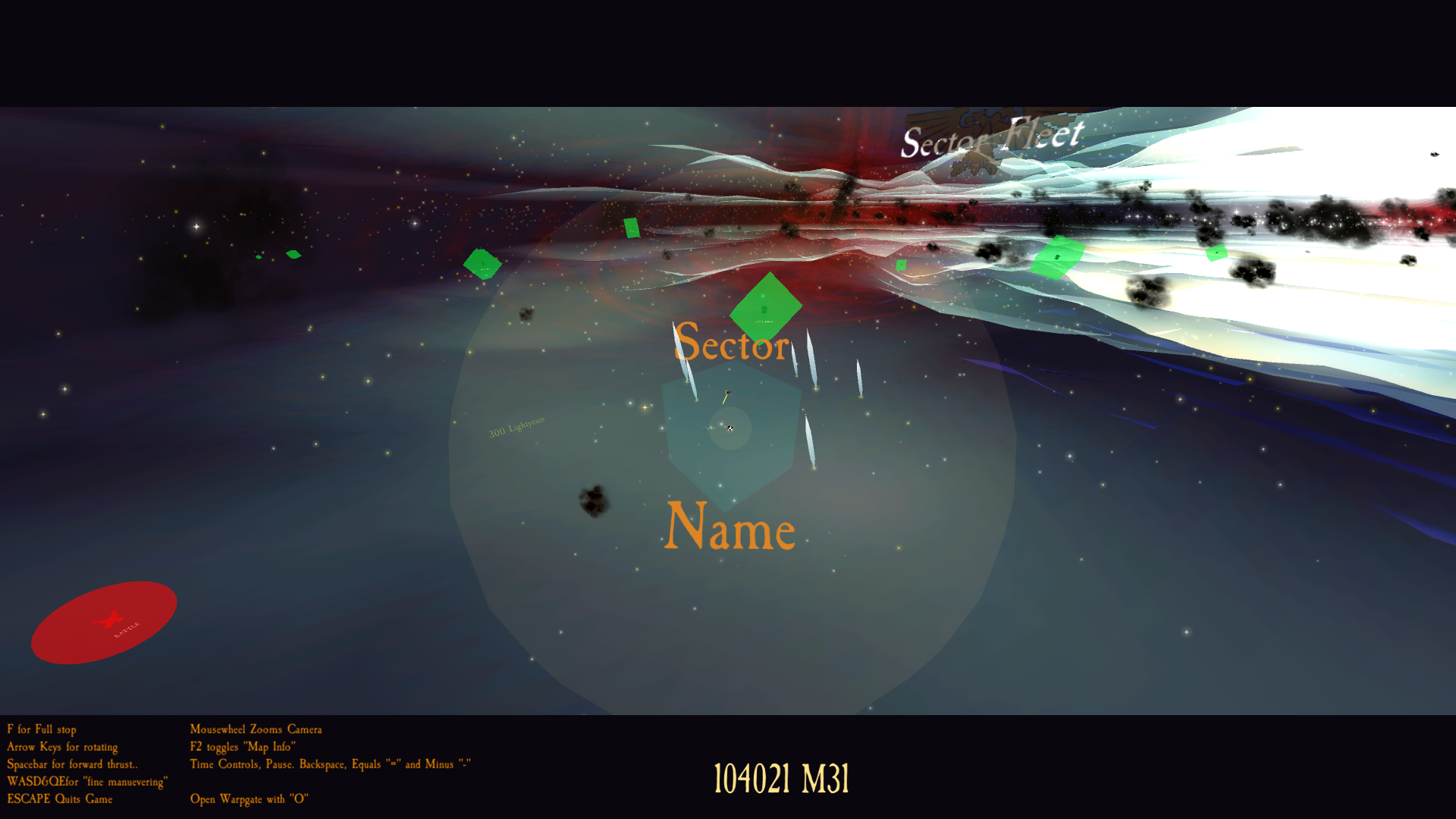 Aug 22.. confusing image above.. but we see the Player's home sector.. a Red spherical Battle/crusade happening nearby.. and several little ork "waaghs".. The eye of Terror and some galactic clouds in the background.. Sector fleet not too far away guarding the area.. lets see... inside the Sector box, we can see a 30Lightyear sphere, and a larger 300 lightyear sphere showing range outside the box.  those white streaky things near the center, show the currents of the warp for those worlds..

Aug 21.. New Download,... cycle is complete.. Player can leave Terra, wander the Solar System and the Galaxy, and can return.. still needs some adjustment.. but now I can start adding some gameplay and "interesting situations" .... ok.. well the Frigate is working for transitions.. but the Star Galleon is not.. working on that..

Aug 20... Warpspace is almost exactly the way I envisioned it in my head.. I'm very happy.... well it still needs some turmoil and roiling clouds of terror 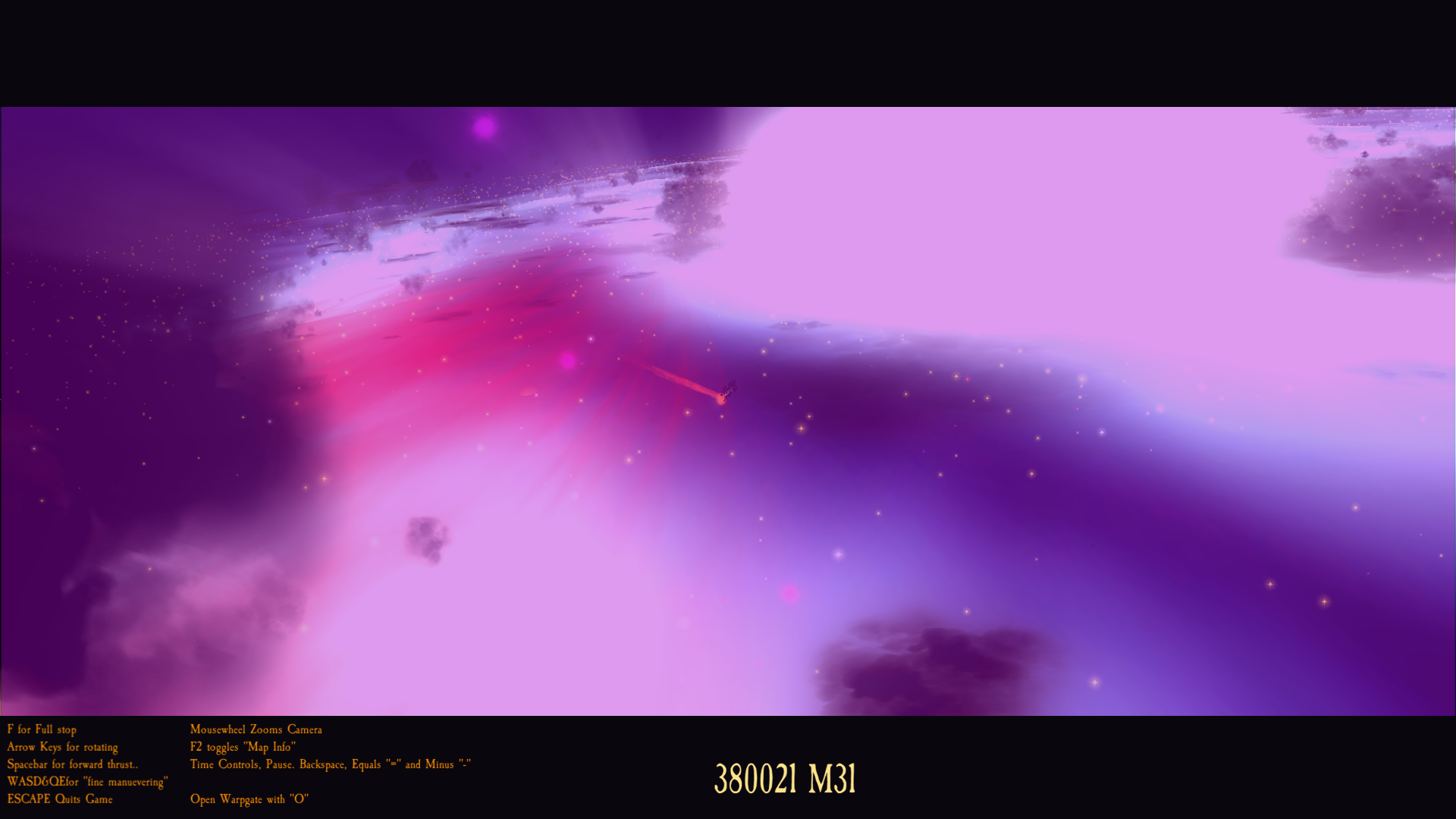 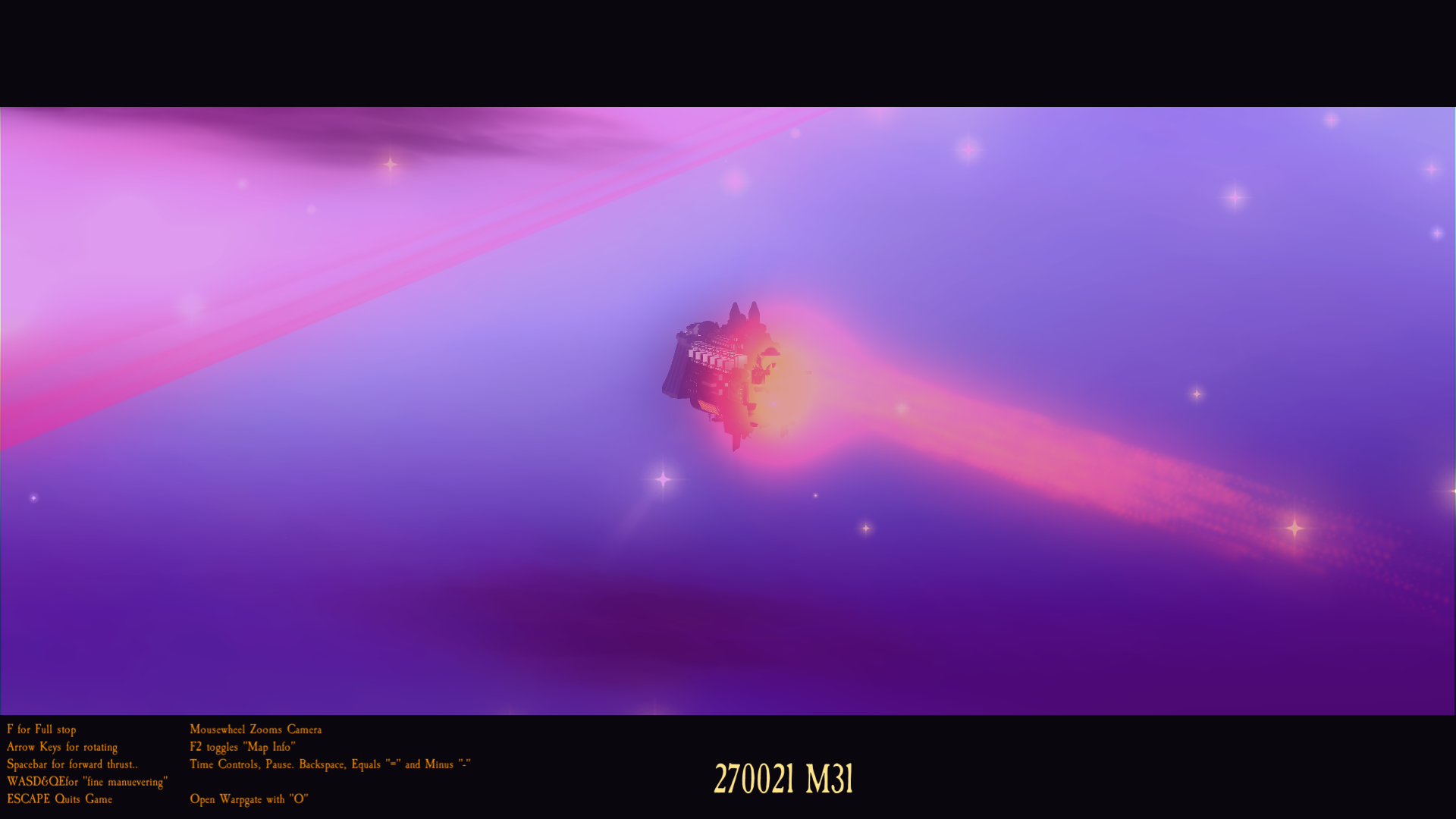 Aug 19th... changed the starting location back to starting at a random Imperial Sector.. so Player may start close to Terra, or be on the otherside of the Galaxy..

Aug 18... hey, it uploaded, and even though there is nothing for the Player to do, i think it looks nice (I'm kinda trying to copy the style of the old art, from the 80s and 90s) 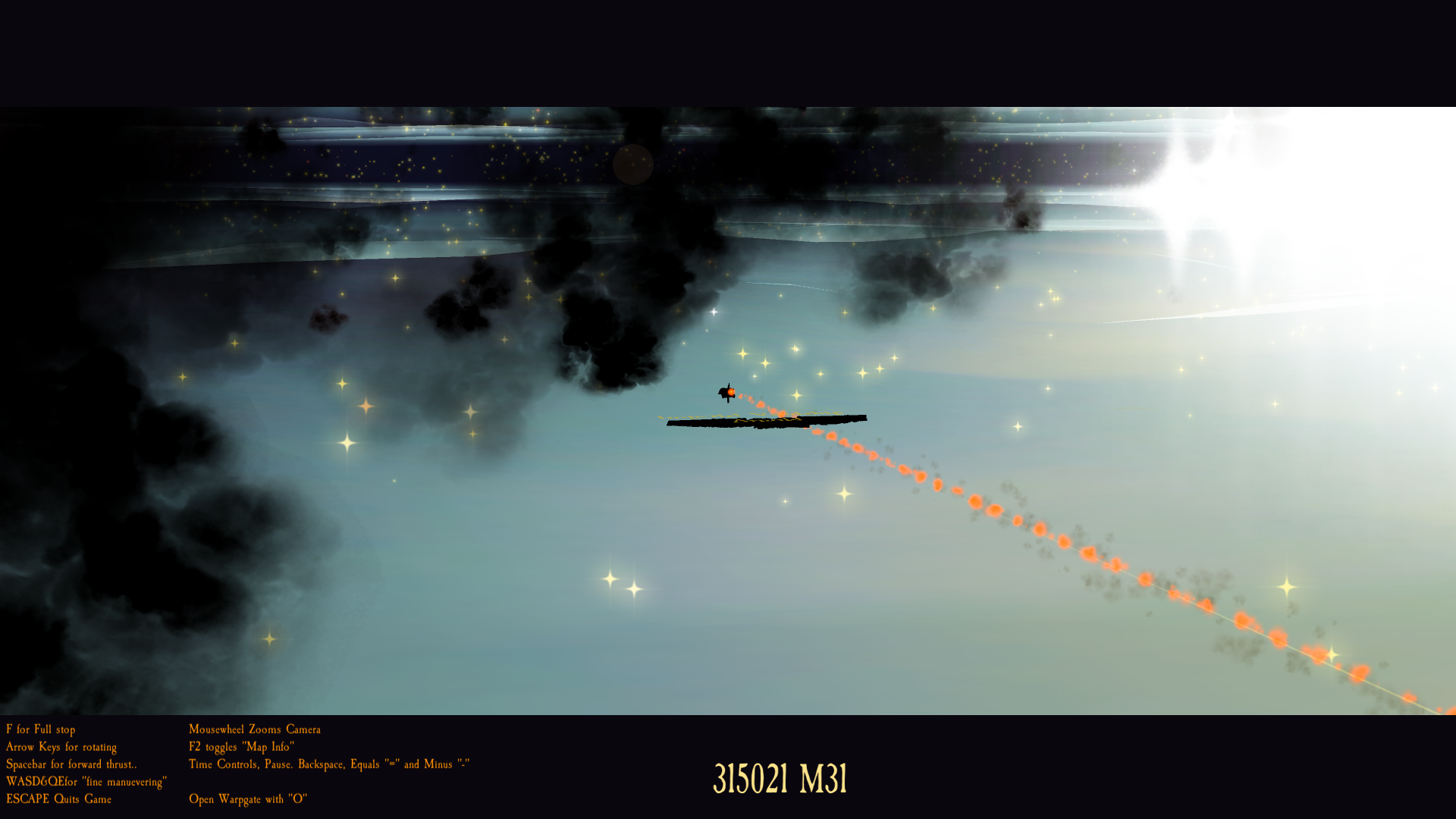 Aug 17.. still having trouble uploading the game.. failed to upload all day yesterday

Aug 16.. OOPS.. download was broken most of the day, is fixed now. ...  Working on getting the basic "leave Terra, Fetch and Return" cycle and improving graphics, I think.. Galaxy is barren as it only has one star, Sol. 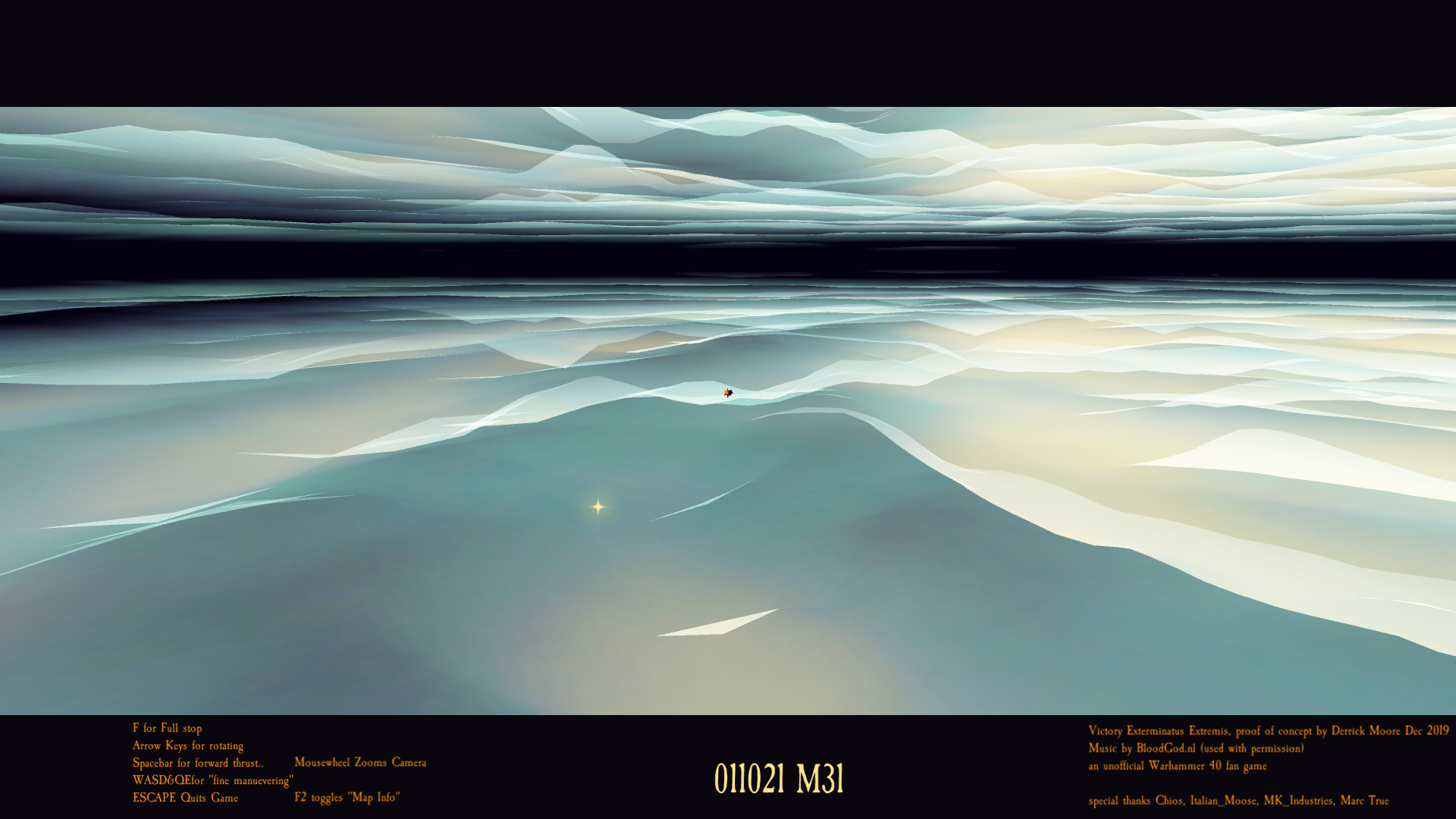 Big thanks to Francesca Baerald who's map of the Sol system in M31 inspired me. ] 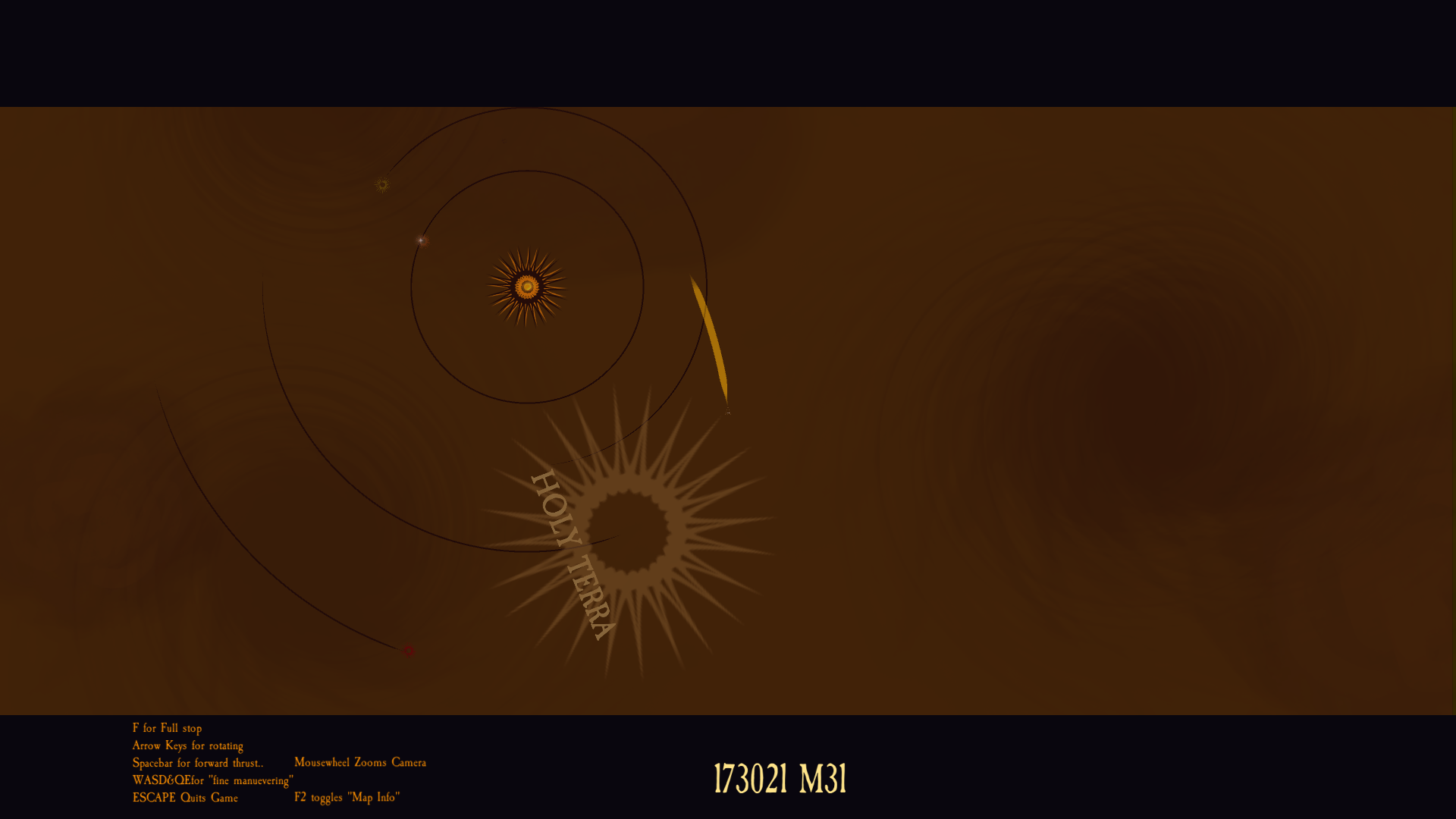 Aug 14..  and I missed the Deadline for the Jam, again.. still working on it next week most likely... had some frustrating memory leak took me all day to find and fix (partical effects with lights with shadows, that was the problem).. so Player can still not yet leave the Solar System (thought the bug was in the "warpgate" but it was in some engine effects.).. and I also saw a real nice Map by Francesca Baerald and thought.. "now that's what I want my Solar System map to look like" (Francesca's map  https://www.artstation.com/artwork/ybNZ9Q ), and so that set me back a little bit as well... 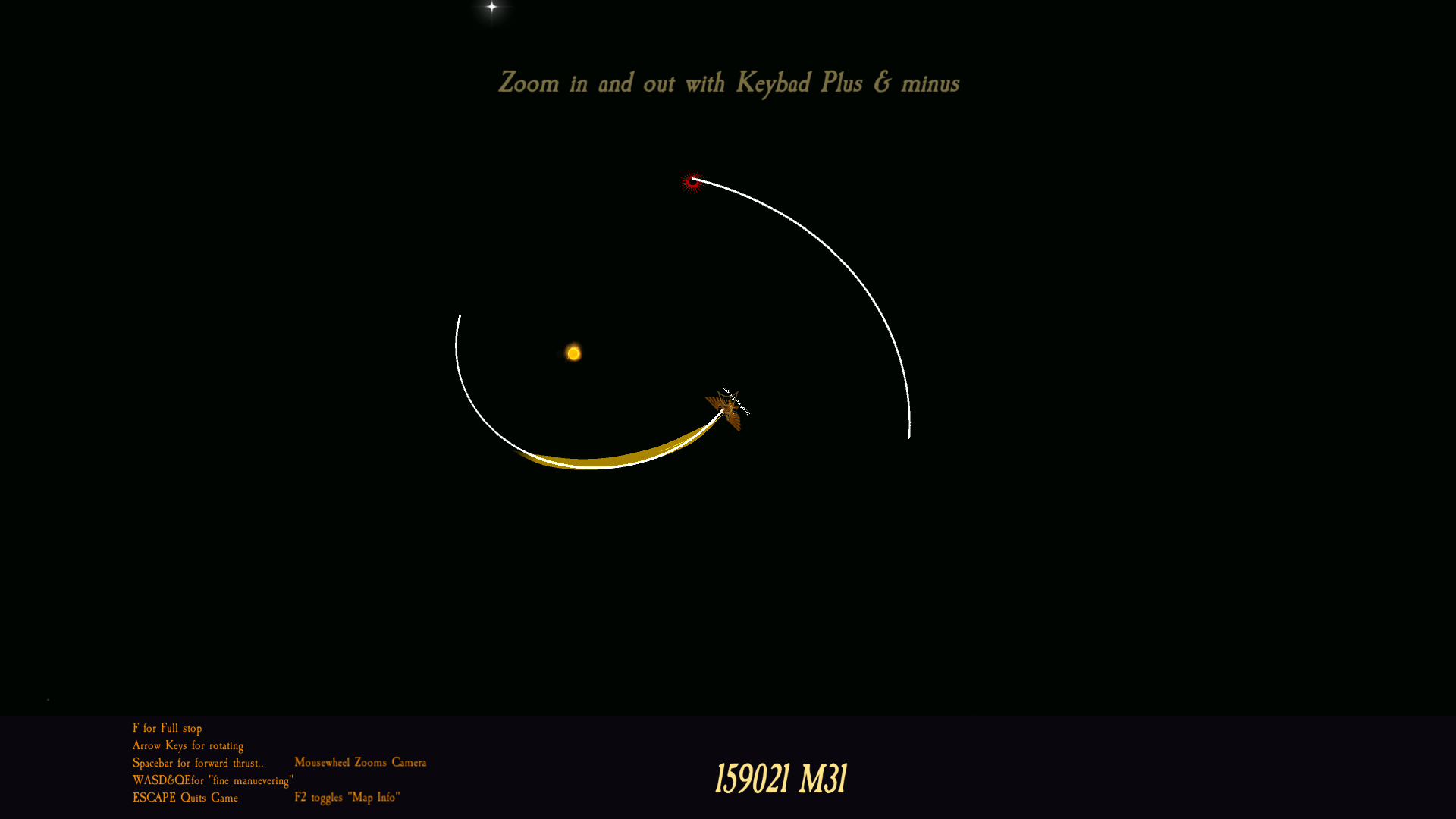 updating my "long term project" trying to do something smaller and more focused. Not much to do now.. Player can "leave area near Luna" and fly around a basic "Solar System".. not really worth downloading at the moment. 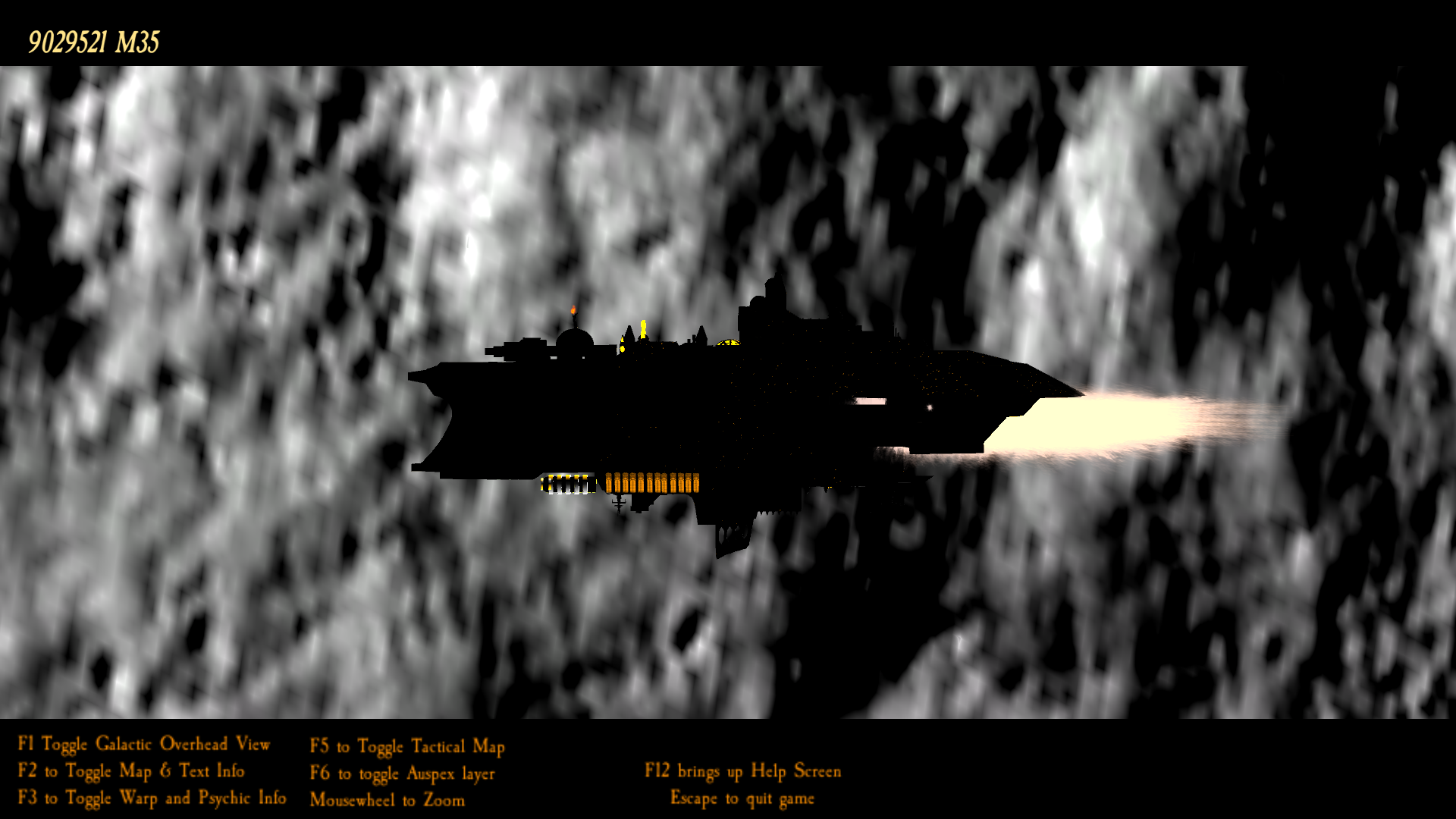 Aug 9.. got some basic bits working.. pretty much kinda rebuilding it from the ground up, but it's much better this way.. some of the scripts i'm updating I wrote a year and a half ago when I was first learning c# and they are very very bad. … ooh, 400 megs download, that's a lot.

Journey to Terra.. OK, I got a week.. i'm taking my "long term project" and trying to add in some gameplay, story, etc... (again).. I take you back to the year 30,021, just 7 years after the Emperor has asceneded the Golden Throne.. and I give you a ship (just a junky pre-Imperial frigate.. for now.. I mean, It doesn't even work since I took out all the code and I'm starting over, sorta.. (keeping everything that's good, but moving on)

I have a question about a annoying topic.

Right to the point: What are your thoughts about copyright and the fact, that GW likes to lash out on fan projects. I saw that you are using a lot of symbols and trademarks. Since you are in the business for quite some time, you propably know the subject better than me. Could'nt it be, that if your project grows and they are getting aware of it, that they try to stop you from going further with it?

Don't get me wrong, I would love to see where your game is going and not getting bogged down in this nonsense I mentioned above... Maybe you have some insight for me what you can do and what not, in respect to the copyright law or what you general thoughts about it is.

Have a nice day.

Copyright.. one thing I do is read over GW's IP policy every few months..  https://www.games-workshop.com/en-US/Intellectual-Property-Policy

so, good opportunity to take a point by point look at it..

We encourage a creative hobby and love to see our fans design their own colour schemes, kit bash their models, write background for their armies, create fan fiction, come up with new scenarios and campaigns and so on. It is also great to see fan websites, blogs and forums discussing the hobby and sharing ideas, and even people dressing up as their favourite Warhammer and Warhammer 40,000 characters at events.

(ok good here, I think.. I'll just add in my notes like this, in bold inside parenthesis)

However, whatever exciting hobby activities you are working on, please do follow the guidelines below. So long as you keep within these guidelines, we are unlikely to object to your activities.

(CHECK, I forget sometimes to add in the "unoffical".. and it's really only semi unofficial, since I was an official GW artist in 1993-4.. Andy Jones called me an official artist while working on that "Dark Crusaders" game)

(CHECK, easy... basicly means dont steal other artist's work.. though I do ask people if I can use some of their fan art.. like, mainly I need 100s of Imperial fan art to make into "stained glass windows" for the voidship exteriors.  )

(CHECK, but showing my fangame to my favorite 40K writers and artists is still cool, i think.)

We take counterfeiting very seriously as it ruins the hobby for everyone. Counterfeiters take advantage of our hobbyists and devalue both our products and your collections. We are committed to taking action against counterfeiters and to supporting victims of counterfeiting. If you have been a victim of counterfeiting then please let us know by emailing infringements@gwplc.com. Include as much information as you can and let us know as soon as possible as we may be able to help you claim a refund through services such as PayPal and eBay.

Using Games Workshop trade marks to name or identify products that were not created by Games Workshop is an infringement of our trade marks. It is very misleading as it suggests something is a Games Workshop product when it is not. Please ensure you do not use Game Workshop’s trademarks in product titles, category headings, adverts etc.

If you think you have a winning idea and want to make a video game, an app, some merchandise, a movie or anything else that you will be distributing (either for free or at a cost) using Games Workshop’s IP then you need permission in the form of a license from Games Workshop. If you've got a strong vision of something you want to produce, using our imagery, and have a sound plan to make it a reality, then the people to talk to are our licensing department. They really want to hear from you! You can reach them at licensing@gwplc.com.

(CHECK, I would like to recruit a few people.. a writer, another coder or artist, an "organizer" and in another 3 years this game will be done, and I'll be ready to start working on my "Dream game")

If you become aware of an infringement of Games Workshop’s IP, please drop us an email at infringements@gwplc.com. Please provide as much detail as possible and include links to the infringing material if possible. We appreciate the support of the hobby community in helping us to protect our intellectual property, and are extremely grateful for all infringement reports received. ```

(umm.... if you find some violation, maybe let me know first, give me a change to fix it)

As I was rereading your answer, I realised, I didnt even say thanks for taking your time and writing everting together. It helped, but I think GW could just say "stop" if they felt like it. But I see your case is also a bit different, beeing an former GW artist and such.

Well anyway, good luck and nice to see progress with Journey to Terra :) 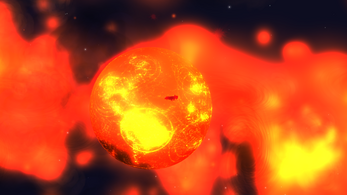 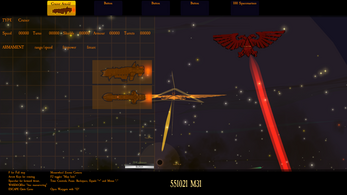 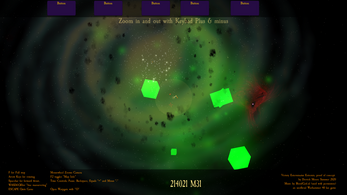 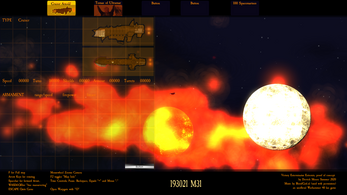 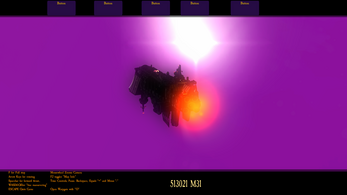 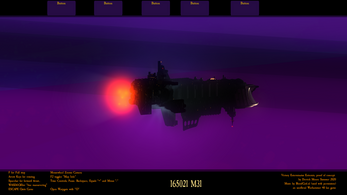 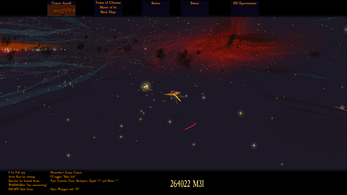 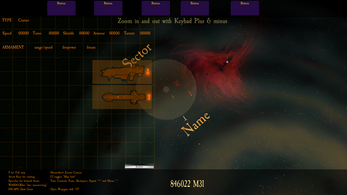 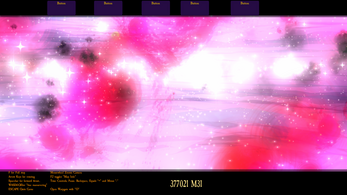