(not nearly done.. loads of errors.. gonna continue all next week)

"40K fangame" somewhere on a generic Imperial World there is a Heretic demagogue hiding.. the Heretic will infect Imperial cities and turn the people away from the Light of the Emperor.. get near the Heretic to detect it, then deploy assets to neutralize the enemy before the entire world rebels..  The player is a "Deacon of the Ecclisarchy" whose main job is to travel from world to world in a city-sized "cathedral ship" collecting tithes from loyal planets.

just continuing from last week.. and actually, this week's theme works better for " a hidden heretic hiding on an Imperial World" so far, I've just been re-creating the world, it's solar system and an "overland" Galaxy travel map.. all based on stuff Iv'e done over the last year, but using this and last week to update, and remake a lot of it... 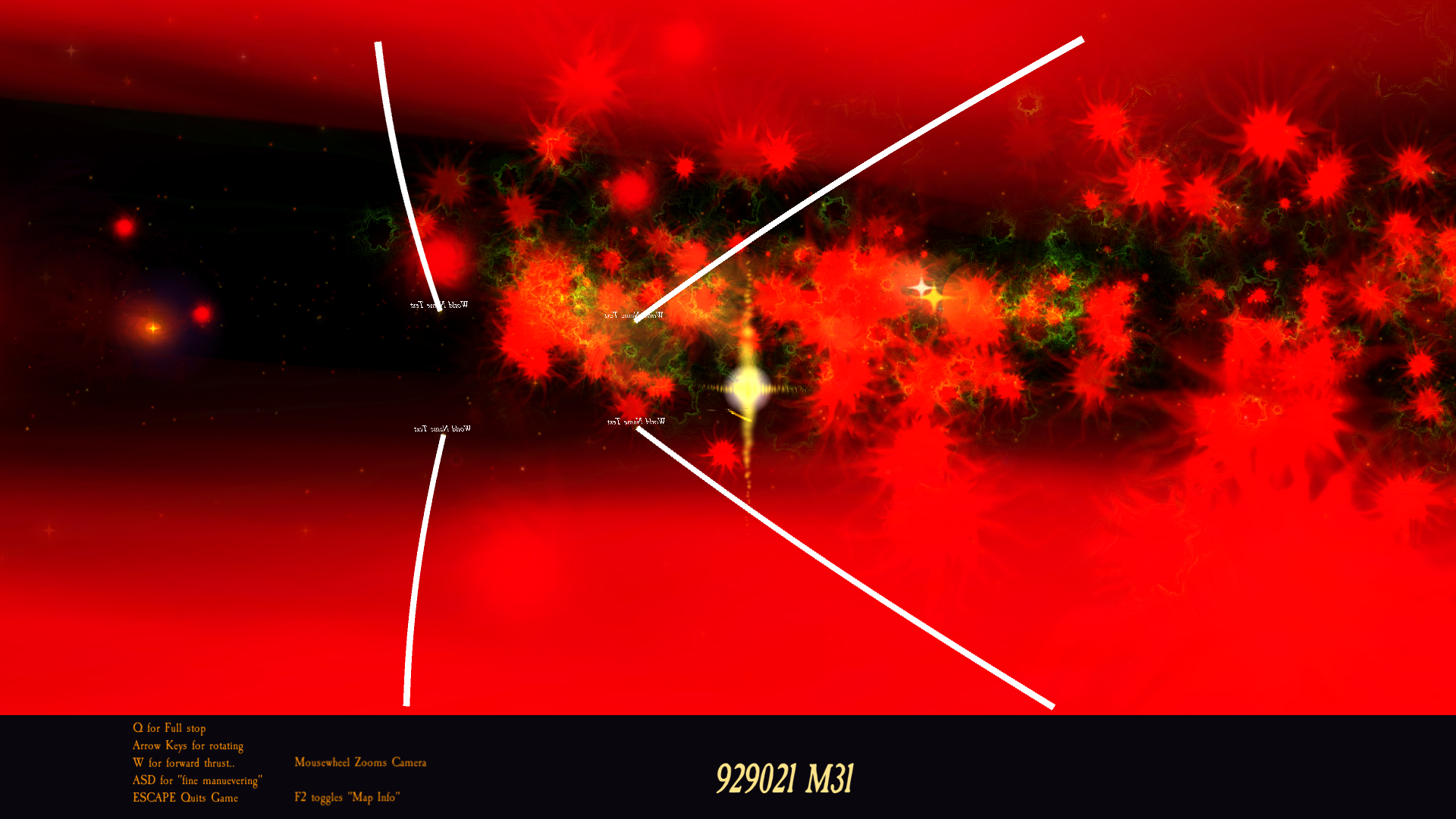 Dec 24, I put a rudimentary "Warpspace" back in..  "reudimentary" because all the planets actually only bring the Player to the "randomly generated world" I'm working on..

(above image shows, very ugly, basic warp with only 2 "powers" out of 4 or 5 represented with the Green and Red colours.. more later, they will be "additive" and should great a nice coloured space, not this "angry fruit salad" that's going on right now.. but the White Lines, show the displacement in the warp because of a year long warpstorm in the area..  (the big yellow spikes, is Terra, doesn't look good, I'm working on that... but it works quite well as a beacon.. i'll post a vid of how the Warp will eventually look again)

it's not as nice as previous versions, but this runs better, and is mostly filled with placeholder art (because I'm trying to keep the game under 300 megs to make it easy to download, and because I want to reuse as many textures as possible.. if I can use the same texture for something in deep space, and something on a planet, i'm happy.

Now, Warpspace is WEIRD.. and really indescribable... (especially since I'm not a writer) but I will try.. In the Age of the Imperium people travel in-between the stars via a kinda "hyperspace"... which happens to be hell.... but the Imperium would not survive if it could not travel in this hyperspace faster than light..

In this Demo, I've only got 4 "generic worlds" and a placement for "Holy Terra" (I've got a beautiful Terra scene, but it's not included here, because of "feature creep".. and only a few "landmarks" in the Warp to navigate by (you will need to navigate eventually), and only 1 encounter, a "warpstorm"..

"the Eye of Terror" not much here yet, because it's mostly a "background scenery piece at the moment... but the Eye is a very large Warpstorm..

Warpstorms, basicly alter the shape and flow of this hyperspace, meaning a planet can move, or be cut off from the rest of the Imperium in the Warp.. it's physical location wont change, but the route to the world through the warp is constantly in flux.. and according to the Lore, only 80-85% of ships actually make it to their destination (in an Imperium of one million worlds, that's a lot of lost ships) and some that do arrive get caught in strange time twists often arriving decades or centuries late.

uploading a test version, will replace it tomorrow

I got a basic "hyperspace" working.. I have some test world in, fly into any of the test worlds, or "holy terra" to go to the Random Solar System.. everything loads to the same random system right now for testing..

once in the system, there should be 3 asteroid fields, 2 worlds and a gas giant.. also, there should be a test spacehulk floating around somewhere..  Flying into that Blue World, should take you to the actual planet..

and tomorrow I should be back to working on the heretic, but everything is very basic, and doesn't yet look as good as the old version. 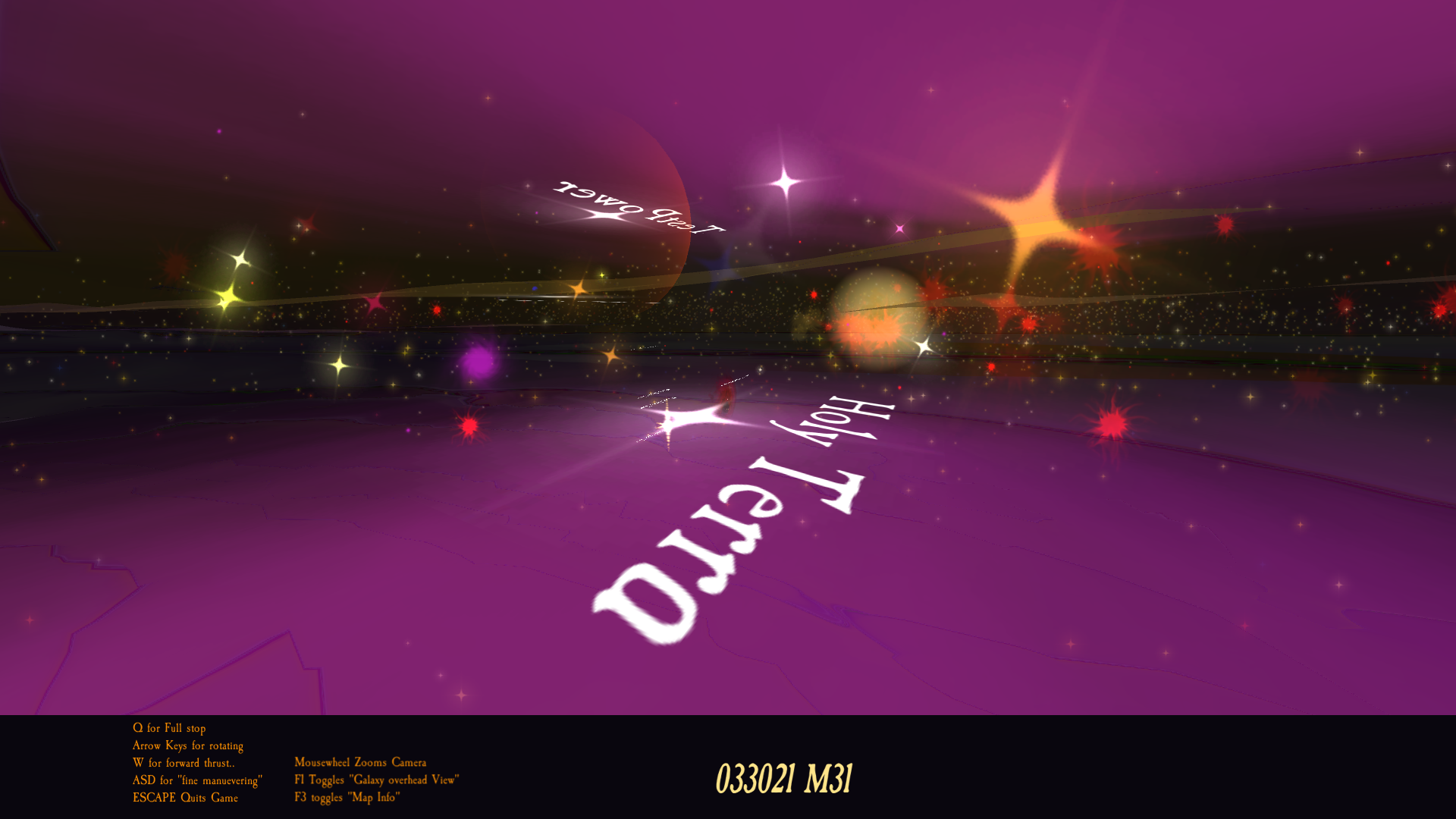 same location, but in real space.. that yellow blobby thing will eventually become the center of the galaxy.. doesn't really look like it right now.. but as you travel around the galaxy, the view should change, landmarks like the Eye of Terror and the Astronomicon will appear in different places 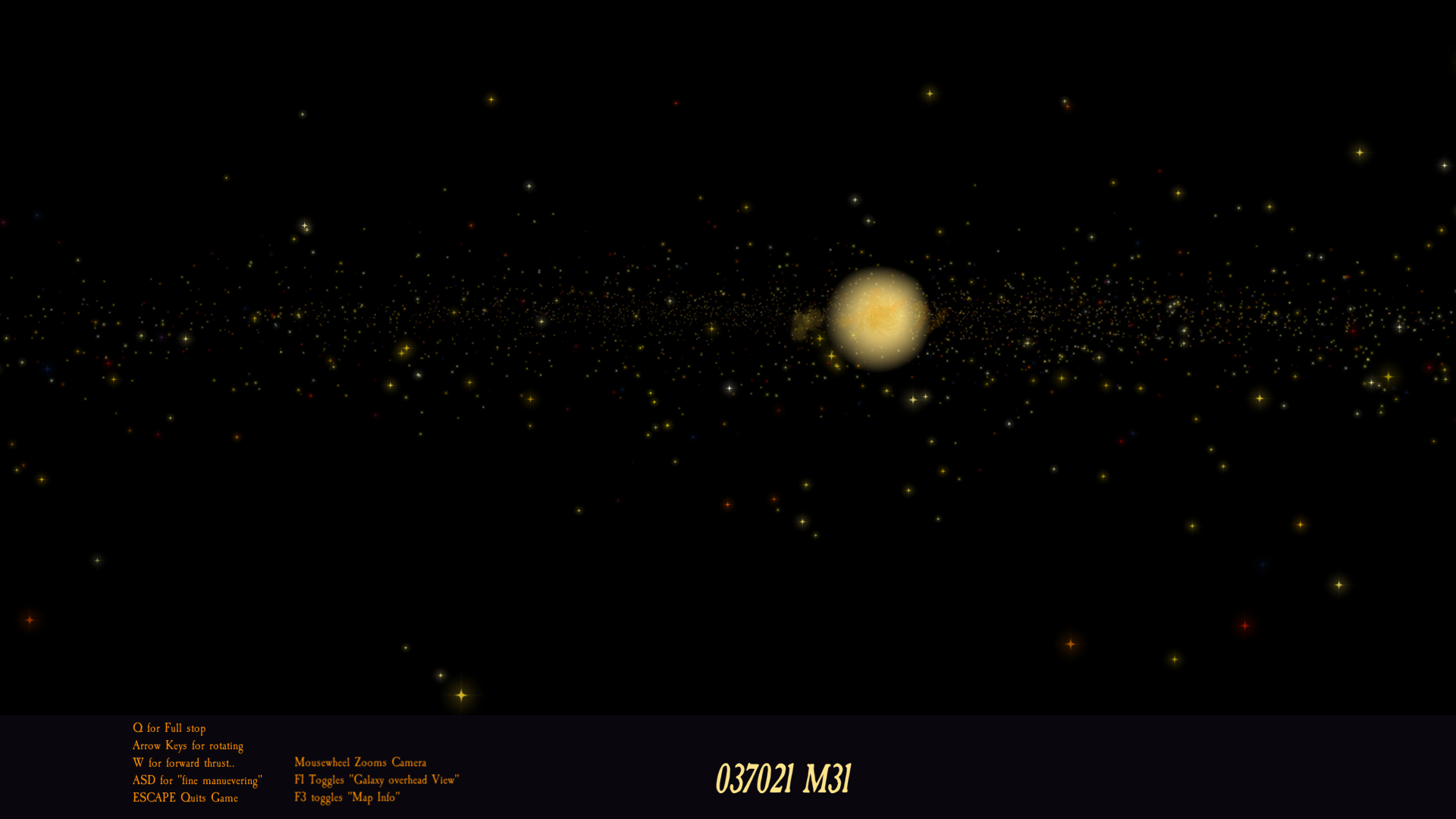 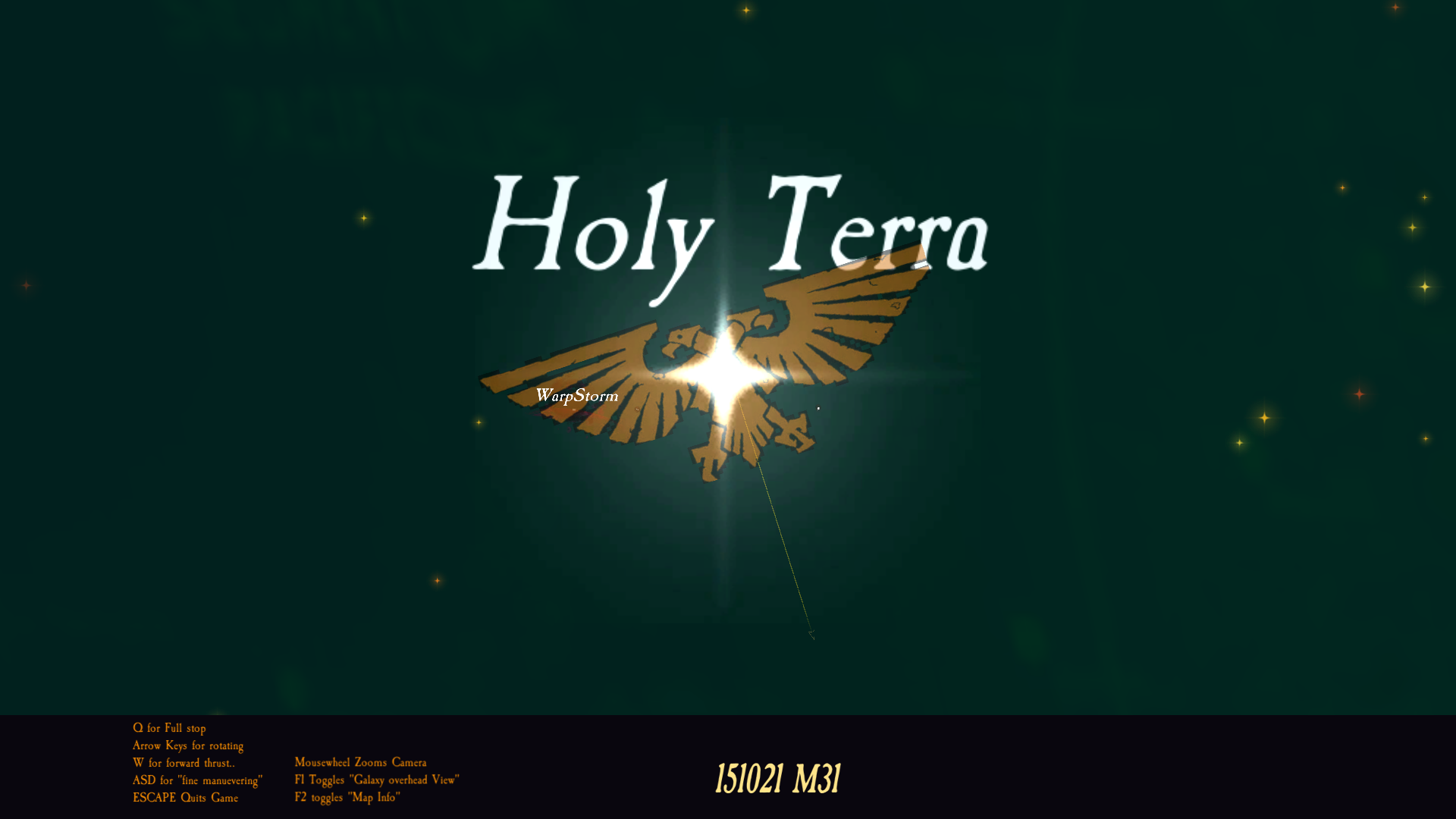 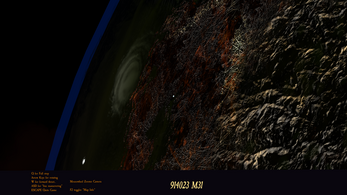 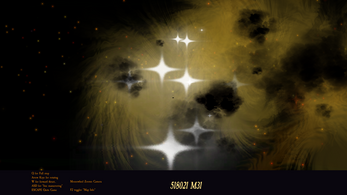 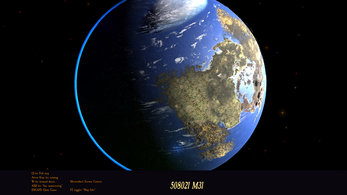 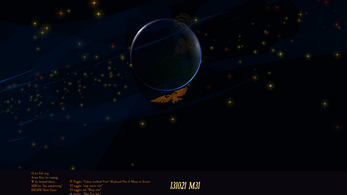 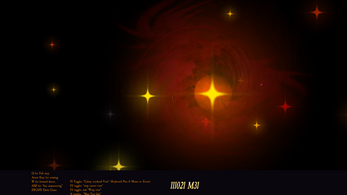 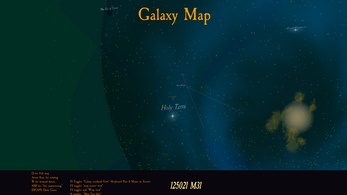