"all the horrors of war, in the safety of a Victorian living room"... get your toy soldiers to the other side of the map..

based on a 1913 book, a game of war with toy soldiers, plays a lot like that "vibrating football game" from the 70s

prototype.. I'd like to flesh this out later..  (the Desktop version is much better ,and has scenery)... and I forgot to texture map the books..  and there's a bug I just discovered, I'll fix it after the jam, where the game will start in "win" mode.. I'm guessing it's because a friendly guy gets knocked into the end zone right away..

so you start in the Atrium of a Victorian house, and your objective is to put at least one regular soldier (not the commander) in that "sitting room" area on the map.. (later, i'll make  a rug or something, to make it stand out..).. .. there are 2 mini maps on the top of the screen and in the desktop version you can mousewheel to zoom in or out..  there is a Red crosshair showing the camera's location, which the player can move with the arrow keys..

Mouse button 2 to designate an Assault .. all the troops move quickly to a white cloud of smoke at  the "focus" location..

the Commander has a jump pack.. because I'm going for a 1930's tin toy feel.. that I think I failed to get across.. next time... I defeinatly want to revisit these little people and their war (the commander is invulnerable, and that's why he can't capture the sitting area, need a regular trooper for that)

you have about 18 troopers.. but not very much control over them.. they know the objective and will also try to follow the 'focus" that red chrosshair,

There are 3 types of trooper, I'd like to eventually have 20 poses and 20 "personality types".. Each personality types so far has just been me trying to learn how to make them act interesting.. I'm not planning on animating any of the soldiers.. because I would like them to look like sci fi Buck Rogers like toys from the 20 and 50s

I'm more of an art person than a coder, and this is my 2nd solo game

Web Browser version is dumbed down, less graphic intensive than Desktop version and still doesn't play as well.. and lacks the pretty scenery 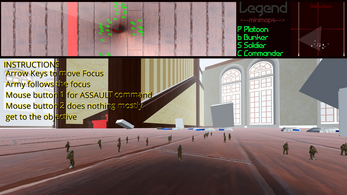 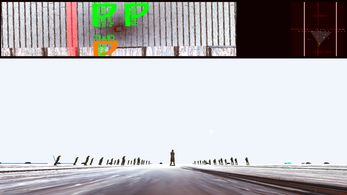 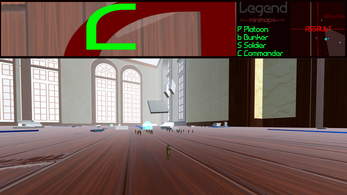 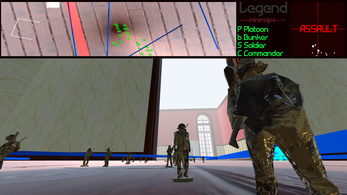 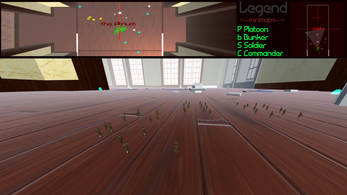