(still have a few errors and no end game.. hoping to fix that tonight)

Based on Howard S. Warshaw's Atari 2600 classic, ET must find and assemble the 3 pieces of the space-communicator without running out of energy.. ET must avoid the Orange Scientist and the Red FBI Agents who want to take ET to their respective headquarters

Red FBi Agents are hunting ET by following the "clues" ET leaves behind (the flower)… if they touch ET, they will carry ET back to their Headquarters, wasting ET's valuable time.. Agents are attracted to "clues" and ET

Orange Dr Scott wants to help ET, but is misguided.. and will  take ET to the University building.  Dr Scott is "attracted" to the 3 communicator pieces and will lead ET there.

Green Elliot appears at his house in the middle of the map to help ET, Elliot is afraid ofand wants to avoid Agents.

ET must eat to keep his energy up, I'm working on "food" at the moment

When ET has all 3 pieces, and is at the Clearing (circular area of trees, the music comes from the clearing to make it easier to find) the UFO will come down to pick ET up...

The Scientist, who wants to find ET and help him (the Scientist in the original game, really wasn't too different from the Agent.. so here I made them have very different agendas.. once ET has all 3 pieces of the communicator,  Dr Scott will give him a ride to the "Clearing" where the mothership is gonna land.

The Government Agent wants to put ET in a labroatory

Elliot and houses create "food" which ET will eventually be able to pick up and use for Energy.  (just touch the food for right now to boost ET's energy)

ET can enter houses, but the Agents and Dr Scott cannot, because they don't have a search warrant and no Judge is gonna give that Agent a warrant to look for extraterrestrials.

Day 1 (week 33). I forgot this week was a ranked week, and I was planning on taking a break. .but . well, i've been wanting to revise one of my first game jams, from 33 weeks ago, and I've learned alot since then.. so.. here's a link to my first attempt. and plan is to fix everything.. and make it a game..  https://derrickmoore.itch.io/game-jam-of-the-week-137-et-the-extraterrestrial 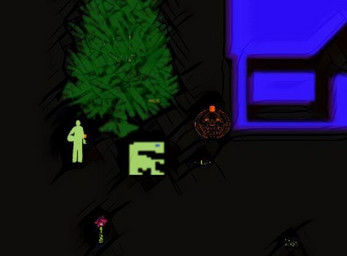